The Nearest Neighbours of Lineage II

In the last blog we looked at one of the closest neighbours of the North Tipperary Gleeson's of Lineage II, namely the Phelps of Group 8 of the Phelps DNA Project. And we learnt that there was a Cromwellian soldier, Thomas Phelps from Gloucestershire, who was granted land in the mid-1600s. This land was later sold by the Phelps family to Lord Bloomfield in 1820. Many Gleeson's lived on Lord Bloomfield's estate, including my own great grandmother.

Now we turn to a general overview of our other close neighbours. And to help illustrate this, we will use four major resources - Alex Williamson's Big Tree, Nigel McCarthy's Group E Phylogenetic Tree, information from relevant Geographic & Haplogroup Projects, and my own Matches Surname Analysis of Lineage II members.

And why do we do this? Because it may gives us clues to the deeper ancestry of the Lineage II Gleeson's i.e. prior to the general usage of surnames, which in Ireland was about 1000 years ago. In other words, this exercise may help connect us to information in the Ancient Irish Annals that will allow us to jump back in time to the Gaelic Clan System that operated up to the middle 1600s.

And that will put us in touch with a past that few of us ever dreamt we would have access to.

First off, Alex Williamson's Big Tree. This only has people who have tested with the Big Y or similar Next Generation Sequencing tests and includes the 9 Gleeson's from Lineage II who have undertaken Big Y testing. And our closest neighbours here are families by the name of Carroll, Pendergast, Phelps, Creamer, McCarthy, Miller, & Treacy. Note that this analysis is based entirely on SNP marker results.

The next resource is Nigel McCarthy's Group E Phylogenetic Tree and this uses a combination of SNP data and STR data, but only from those individuals who have tested to at least 67 STR markers. Nigel's tree is more comprehensive than Alex's Big Tree and includes 13 Lineage II Gleeson's as well as several additional neighbours to those mentioned above -  McMahon, Bell, McConnell, Crimeen, & Creamer.

The main projects relevant to Gleeson Lineage II are as follows:

The DNA Results pages of these various projects were reviewed for anyone with the known SNPs at or downstream of Z16437/9. It is important to review all these projects because some individuals may have joined one project but not another. Some additional surnames arising from the review include: Orgain, Morrison, O'Keefe, McMahon, McLachlan, McCarthy, Bowman, Nicholson, McConnell

The last resource for identifying our close neighbours is a Matches' Surname Analysis, and this uses only STR data. It involves noting down every surname on each member's Y-STR matches list and how often they occur. Only the most common surnames among the matches are outlined below - there were many other less common surnames and you can see the full list in the tabular outputs of this analysis at the end of this post. New names not previously mentioned above are highlighted in bold:

However, there are drawbacks and caveats to the Matches Surname Analysis and the dataset may be heavily contaminated with misleading data due to Convergence, NPEs, or a mixture of both. I discuss these issues in greater detail in this blog post here.

So whilst the latter analysis could potentially be useful for generating clues worth pursuing, one should be circumspect about its output. In short, be very wary.

Next, each of these surnames was searched in order to try to identify a terminal SNP. Here is what was found:

Any individuals identified as not below Z16437/9 were to be excluded from the analysis. Any with no identified sub-Z16437/9 SNP were to be tentatively included. However, it was not possible to identify any SNPs that were sufficiently downstream. Therefore these matches could either be "true matches" (i.e. close neighbours) or alternatively due to NPEs or Convergence or a mixture of both. So all the above surnames are tentatively included as potential "close neighbours" of the Gleeson's of Lineage II.

Thus, collating all the above information allows us to generate a revised diagram of the neighbours of Lineage II incorporating all the information from the various sources. The red dashed line indicates that the individual sits at or somewhere below the SNP indicated.

What becomes apparent from this analysis is that there is a strong signal for the Carroll family being our closest neighbours, followed by the McMahon's and McCarthy's and possibly the McLachlan's & O'Keefe's, and finally a bunch of people under A557/8.

Interestingly, the Matches' Surnames Analysis picked up a very low signal for these "closest neighbours". The surname Carroll only scored a maximum of 0.3 mpm, McCarthy was 0.38, and McMahon was 0.15. This suggests that it may not be a very useful way of identifying related surnames and may be subject to a large degree of Convergence.

The purpose of exploring all these resources is to try to identify a signal for surnames that may be related to us via a common ancestor prior to the advent of surnames. By determining which non-Gleeson surnames we are closely related to, we may be able to link in to some of the Ancient Irish Genealogies described in the Ancient Annals and that could shed light on our deeper origins within Ireland (back in the first 1000 years AD).

In the next post, we will look at the neighbouring surnames identified by these analyses and explore how each of them might be connected to the North Tipperary Gleeson's of Lineage II. 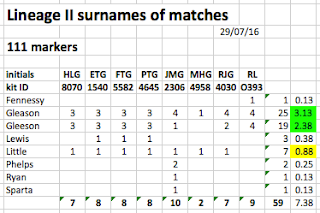 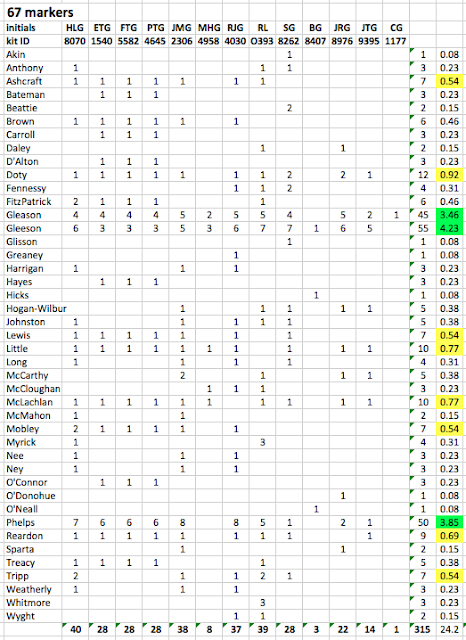 Posted by Maurice Gleeson at 17:44