The Gleeson name in Surname Dictionaries

If you want to get some idea about the possible origin of a particular surname, a Surname Dictionary is a good place to start. There are several surname dictionaries that address the topic of Irish surnames, and perhaps the most well-respected are those of Woulfe and MacLysaght. But do they give us any clues as to the origins of the Irish version of the surname Gleason / Gleeson? Read on ... all will be revealed. 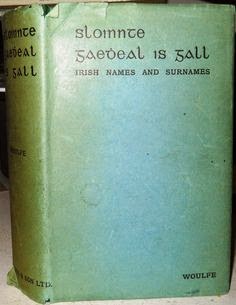 The Rev. Patrick Woulfe (1872-1933), or as he preferred to be known, An tAthair Pádraig de Bhulbh, was born in Cratloe to Seamus Woulfe, a farmer. He became a priest, worked in Limerick, and spent 25 years collecting names, communicating with native Irish speakers and studying the different forms of Gaelic to compile the Irish Names and Surnames dictionary. There are two versions of his book – a small version (138 pages) and a larger version (742 pages). The smaller version was originally published in 1906 and reprinted in 1922 – this is available online in its as original print form from Archive.org here. The larger version was printed in 1923 (reprinted in 1967) and consists of 696 pages, with 46 pages of preliminary text. A digital version of the book is available free of charge online from Library Ireland here. The search feature is very useful and allows you to find any mention of a particular name within the book. Woulfe’s work helped to popularise the use of Irish first-names during the last century and has been an important resource for genealogists. His work was subsequently superseded by that of other scholars, such as Edward MacLysaght.

Edward MacLysaght was an interesting character. He lived to be 99 years old (1887-1986) and packed a lot into his lifetime. His father was from Cork, his mother from Lincolnshire, and he was born near Bristol. He went to school in Rugby and then Corpus Christi College, Oxford to study law. But a rugby injury changed his life - he went to Lahinch in Co. Clare and lived in a caravan for 6 months recovering. During this time he developed a love for genealogy, history, and the Irish language, in which he became fluent. He started a pioneer farm in Raheen and introduced electricity 40 years before his neighbours. He also set up local community projects and was deeply involved in the Irish Cultural Revival and the movement for Irish independence. His loyal support of Eamonn de Valera (then member of parliament, and later President of Ireland) resulted in his imprisonment. After independence (1922), he was elected to the Seanad Éireann (the Irish Senate). He later became an Inspector for the Irish Manuscripts Commission (1938), a member of the Royal Irish Academy (1942), Chief Herald of Ireland (1943-1954), Keeper of Manuscripts at the National Library of Ireland (1948-1954), and Chairman of the Irish Manuscripts Commission (1956-1973). It was during this latter period that he wrote his indispensible books on Irish surnames.

MacLysaght, Edward. The Surnames of Ireland. 1957 (sixth edition 1991)
This is a comprehensive list of over 4000 Irish surnames with a short description of each. It includes 1500 surnames not considered in the other books below, which only deal with about 20% of the surnames described in this present book (albeit in a lot more detail).

MacLysaght, Edward. More Irish Families. 1970 (first paperback edition 1996, incorporating Supplement to Irish Families, 1964)
These latter two volumes (frequently abbreviated to IF and MIF) give a much more detailed account of many of the most common Irish surnames. Second hand copies can be bought online, usually for quite inflated prices.

Woulfe’s entry for Gleason / Gleeson as a surname can be found here:

This does not provide us with a huge amount of information relating to the origins of the "clan" but MacLysaght has a lot more information.

MacLysaght gives a brief account of the Gleeson surname in his Surnames of Ireland and a much more detailed account in his Irish Families.

(O) Gleeson Ó Glasáin or O Gliasáin. The anglicized form of this name in Kerry is Glissane. The main sept was located in lower Ormond.

The abbreviation IF refers to his book Irish Families, and Map Tipperary refers the reader to the map in that book on page 222 where the Gleeson name is located just below Lough Derg. The entry in Irish Families is much more informative:

O'GLISSANE, GLEESON. In spite of its English appearance in it's anglicized form the name Gleeson, never found with the prefix O in English, is that of a genuine Gaelic Irish family. In modern Irish it is O Gliasáin, earlier Ó Glasáin and originally Ó Glesáin. They belong to the Aradh* and their original habitat was Mac Ui Bhriain Aradh's country, that is the country in Co. Tipperary between Nenagh and Lough Derg; but it should be emphasized that the Gleason's are not Dalcassians**; they are of the same stock as the O'Donegans, of the barony of Ara, Co. Tipperary, who were originally of Muskerry, Co. Cork. In the census of 1659 the name is very numerous in north Munster (Counties Tipperary, Clare and Limerick] being then given many spellings, e.g. Glisane, Glison, Glyssane, O'Gleasane, O'Glassane etc. They are still fairly numerous in their home county but are not found much outside Munster. Prior to 1641 the O'Glissanes were very extensive landowners in Co. Tipperary but as such they disappear in the Cromwellian settlement.

Persons of the name have not been prominent in Irish history or literature, but four Irish Gleesons are well known in America, viz. Father William Gleeson, called the "founder of the Church in California"; Edward Blakeney Gleeson, the Rochester millionaire; Frederick Grant Gleeson [1848–1903], the composer; and Mgr.^ Joseph M. Gleason [1869–1942], educator and historian.

It's interesting that MacLysaght felt that the Gleesons were not prominent in Irish history - there are lots of examples. In fact, that could be the subject of a subsequent blog post. Submit your candidates now!

A third surname resource, that is freely available online, is that of John O'Hart and entitled Irish pedigrees; or, The origin and stem of the Irish nation. However, O'Hart's research is not generally considered to be as good as that of Woulfe and MacLysaght. It was published originally in 1876 and is available in two volumes - click here for Volume 1 and Volume 2. The introduction to both volumes makes for interesting reading. There is a brief entry for Gleeson:

13. O'Breoghan (this name "Breoghan" is considered the root of Brown), O'Glaisin (Glashan, or Gleeson), O'Mictyre and O'Keely were chiefs of Hy-MacCaille, now the barony of "Imokilly," in the county Cork.

So MacLysaght asserts that the Gleeson sept is related to the O'Donegan's and originated in Muskerry, Co. Cork and later became prominent in Aradh, Co. Tipperary, whereas O'Hart asserts that they were chiefs in Imokilly, Co. Cork. Despite all the above, there are some people who disagree with the conclusions of these erudite scholars and would dispute some of the assertions made within the works. This is where DNA comes to the rescue.

Each of the areas indicated in the above map are associated with a preponderance of certain surnames. These are nicely illustrated in the maps included in MacLysaght's Irish Families (p222) . Surnames associated with the Aradh area include: O Kennedy, O Hogan, O Brien, O Reidy, O Donegan, O Lynch, O Meaghar, O Meara, O Mackey, and O Danagher.

Other online surname distribution map sources include the following:

We will explore this topic further in a subsequent post but it should be possible to identify the most likely Irish origins of the Gleeson septs of Lineages II and III within the DNA Project by examining the surnames of the closest matches to the members of these groups and through the additional SNP marker testing that is currently being carried out. This will help define on which branch of the human evolutionary tree these Gleeson septs sit, and furthermore, we will be able to determine which other surnames sit on adjacent branches. The surnames most closely related may represent the early neighbours of these particular Gleeson septs, some of whom will be directly related via a common ancestor prior to the advent of surnames, and others who may be associated with an ancient NPE (non-paternity event) where a Gleeson was the father. In this way we will be able to estimate the probability that each Gleeson sept was present in a particular area (i.e. Aradh, Muskerry, Imokilly) and we might even be able to give a rough timescale for their presence there.

Thus, with the advent of DNA testing, we will be in a very strong position to determine the various Irish origins of the Gleeson surname and thus confirm or refute the theories put forth in these surname dictionaries.


* Aradh ... the territory east of the southern part of Lough Derg, now roughly corresponding with the Barony of Owney and Arra, which was previously ruled by the O'Donegans.
** Dalcassian ... people belonging to the sept of Dal gCais
^ Mgr. means Monsignor