The Gleason/Gleeson DNA Project has a number of different resources to help you trace your Gleason/Gleeson ancestry. If you are new to the Project, or even if you are an old hand, here is a useful summary of all the wonderful places you can visit and what each of them has to offer you.

But before we even get to the Project resources, the starting place for most people will be their own DNA results page on FamilyTreeDNA and here is my Dad's results page below as an example. 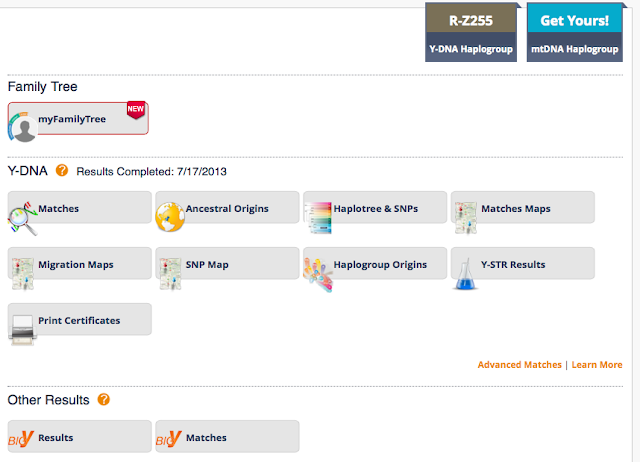 If you click on Matches under Y-DNA, that will show you what matches you have at different levels of comparison. The picture below shows that my Dad has 2 matches at 111 markers. But I could adjust the number of markers compared by clicking on the dropdown list beside the heading "Markers" (indicated by the red arrow) and choose 67 markers or 37 markers, etc. This will allow me to compare my Dad's results with other people within the FTDNA database who have tested to this particular marker level.

In the first column, the heading is Genetic Distance (GD), and my Dad has a GD of 6 and 9 for his two matches. As we are comparing at the 111 marker level, this can be written as 6/111 and 9/111. Genetic Distance refers to how close or how far away your marker values are when compared to another person. A Genetic Distance of zero means that the values for all of the markers are exactly the same - this is called an exact match.

Who qualifies as a match to you? Anyone whose marker values are sufficiently similar that they meet the criteria set by FTDNA to be declared "a match". And here are those criteria:
The ISOGG Wiki has a very nice summary of Genetic Distance and the criteria for matching.

However, your own webpage only shows you your own matches - it does not show you other people's matches. And it does not show you matches that fall outside of FTDNA's matching criteria but which may still be relevant to you. For that, you need to visit the Gleason/Gleeson DNA Project website.

And the most useful page is probably the Results page because this is where you can compare your results to everyone else in the project. Above is a screenshot of the results page.

Reading from left to right across the table ...

As Project Admins, Judy and I will allocate you to specific groups within the DNA project depending on who you match. So far there are four distinct groups or 'Lineages' within the project. Lineage I members are descended from Thomas Gleson of Cockfield, Suffolk, England (Judy's ancestor), whereas Lineages II & III are Irish groups with origins in Tipperary and Clare respectively. Lineage IV is a small group of people whose origins currently lie within the US. My own particular Gleeson branch belongs to Lineage II.


Another important page on the website is the Patriarchs Page. This is where we post the pedigree of each project member and as you can see in the screenshot above for Lineage I, it potentially helps in the reconstruction of the family tree of the Common Ancestor associated with each Lineage. All members are encouraged to submit their pedigrees for inclusion on this page. Have a look through it - you may discover your own ancestor there!

The other major resources associated with the Project include this blog and the Gleeson Genealogy Forum on Facebook. This currently boasts 178 members and is a great place for socialising with the other members of the project, sharing information, and making new friends.

And anyone who joins will get a brief "report" of their results courtesy of myself or Judy. This will include an analysis of haplogroup origins, interpretation of matches, what additional projects would be worth joining, and what further DNA testing might prove fruitful for their particular situation.

So do explore the website, this blog, and the Facebook group - there is lots to discover about your Gleason/Gleeson heritage. And come back to this blog often - it will be a repository of knowledge and a log of our ongoing discoveries.