The wedding of genealogy and genetics has produced a new science—genetic genealogy (GG).  It is a “science” because hypotheses will be formed and conclusions drawn based on evidence.  If GG is to be accepted as such, then the genealogy part will have to conform to rigid standards, otherwise the conclusions are worthless. In the past, those who simply copied someone else’s family tree from the Internet, or from an old family history, could call themselves genealogists. No more! Every piece of evidence must be supported by reputable sources, or should have circumstantial support that renders its acceptance beyond a reasonable doubt.  Of course DNA evidence is now our newest tool—and the most powerful. You can argue with the interpretation of results, but not with the facts.

The following presents evidentiary proof to settle a mystery in the history of Gleason Lineage I. Results of Y-DNA testing has shown that certain persons are indeed members of the lineage that descends from Thomas Gleson, born Suffolk in 1609. Although the paper trail of evidence is incomplete, it is clear that the descent is true. We only have to find that evidence that makes the connection. This is the proof for just one step in that genealogical connection.

Joseph GleasonA married Hannah Ha[y]ward, 28 Feb 1739 in Upton, MA.[1] His origin is unknown. He died in Upton in 1747 where his probate records can be found with the inventory of his estate, guardianship of his children, and his occupation as blacksmith.[2]  The Vital Records of Upton list the birth of two children; however, the probate records reveal three children born to this couple: 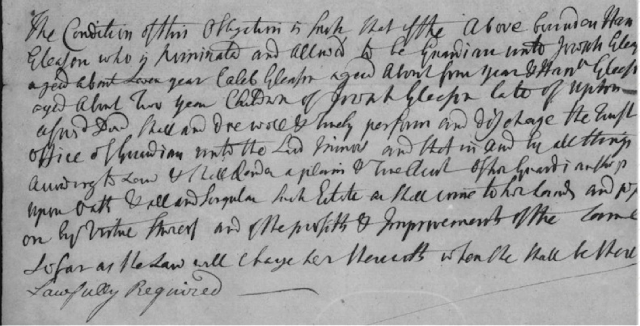 Children of Joseph of Upton
Worcester County, MA: Probate File Papers, 1731-1881. Online database. AmericanAncestors.org. New England Historic Genealogical Society, 2015. (From records supplied by the Massachusetts Supreme Judicial Court Archives.)
Joseph GleasonC married Sarah Eddy, 22 Dec 1762 in Oxford, MA.[3] He was identified in the record as Joseph Gleason of Sandisfield. Sarah was born 11 Jun 1737 in Oxford to Ebenezer and Ruth Eddy.[4] The couple settled in Sandisfield, and in the Sandisfield Vital Records we find that that Joseph Gleason and wife Sarah had the following children:[5]

It is important to note the names Caleb, Hannah, and Samuel given to their children for reference in the following paragraphs.

1. JosephC married two days after the twenty-second birthday of JosephB. Often, in this culture, young men did not marry before age twenty-two.
2. Hannah Hayward was born 25 July 1718 to Samuel and Hannah, according to the records of Bellingham, Massachusetts.[6]
3.  Samuel and Hannah Hayward of Bellingham and Mendon had a son Caleb, born 25 Jul 1720. He died at age twenty-one “by a very sad accident.”[7] This Caleb was the younger brother of Hannah (Hayward) Gleason, wife of JosephA, and the name Caleb was given to their second child. The probate records of JosephA say that Caleb was a very “weakly” child, and show money spent by widow Hannah for his care.
4. On 13 Nov 1751 Hannah (Hayward) Gleason married Samuel Temple “of Bedford” in Upton.[8]  The couple moved to Acton and had several children. Samuel Temple had died by Jan 1761, and Hannah was given administration of his estate in Acton.[9] By this time, her oldest son JosephB was twenty-one and likely received his inheritance of £48-6-5 from his father’s estate. His little brother Caleb, age 18, asked that Thomas Stearns of Littleton be given his guardianship.[10]

Inheritance of Joseph Jr. of Upton

The final proof of the relationship comes from the record of a “mortgage” of £16 from JosephC and Sarah Gleason of Sandisfield to Thomas Stearns of Littleton to be paid to Caleb Gleason, brother of Joseph of Sandisfield, should he ever return to claim it. Here the word mortgage was used as we would use the word “note.” A copy of the original document was presented to the Littleton Historical Society and is described in their Proceedings of 1895:

Mortgage, Joseph and Sarah Gleason, of Sandisfield, Berkshire Co. Mass., to Thomas Stearns, of Littleton, March 1, 1722 [sic], containing a peculiar provision that if Caleb Gleason, late of Bedford, brother of Joseph, of whom Thomas Stearns was guardian and who had been absent ten or eleven years and was supposed to be dead in Great Britian, should appear within fifteen years, the £16, for which mortgage was given, should be paid with interest, if not, mortgage should be void. [11]

The document was never recorded. Despite the obvious error in the transcription of the date,[12] it conclusively proves that the brother of Joseph of Sandisfield was the Caleb Gleason whose guardian was Thomas Stearns of Littleton; and since we have shown that Thomas Stearns of Littleton was the guardian of Caleb the son of Joseph of Upton, it follows that Joseph Gleason of Upton was the father of Joseph Gleason of Sandisfield.

The Vital Records of the various towns are published and are available online at: 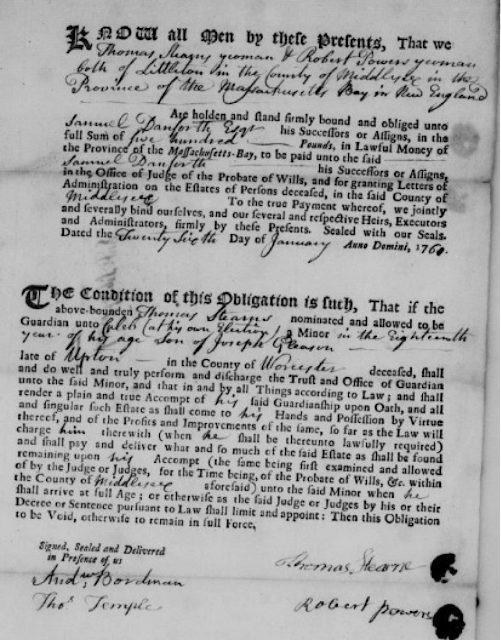 Posted by Maurice Gleeson at 17:06