In the previous post, evaluation of the surnames of matches of the two members of the Cork Gleeson's group (Lineage V) returned an array of relatively unusual surnames. In this post, we explore where these surnames were distributed within Ireland and the UK based on 1881 (UK) and 1901 (Ireland) census data available from the Forebears website.

The matches of the two members included the following surnames and their relative frequencies:

Below are distribution maps relating to each of the surnames in the list (click to enlarge individual maps). 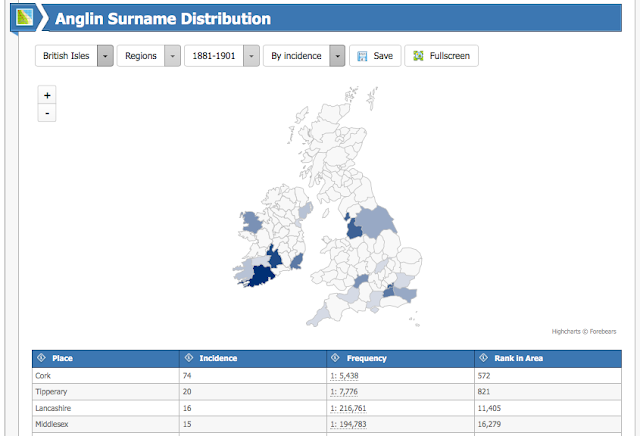 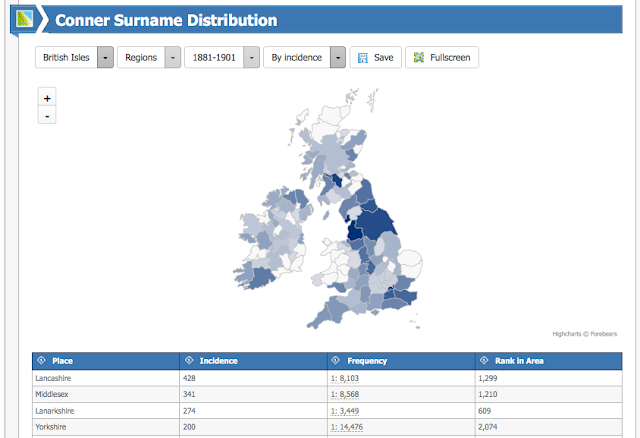 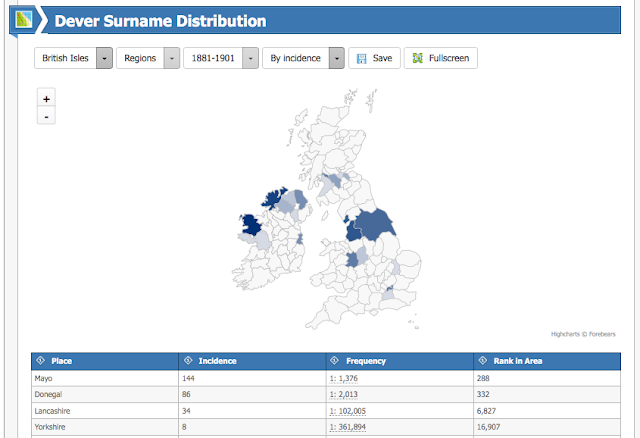 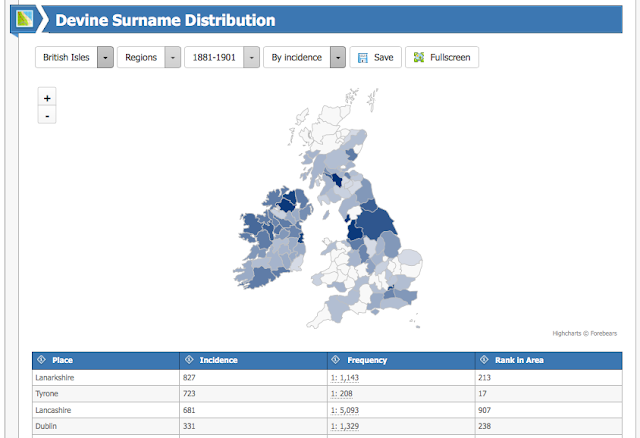 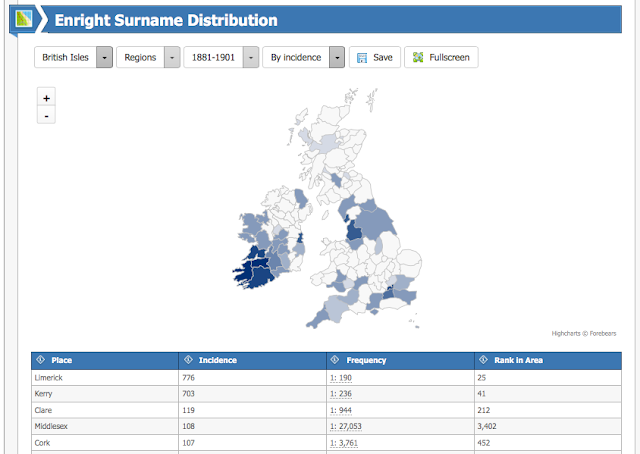 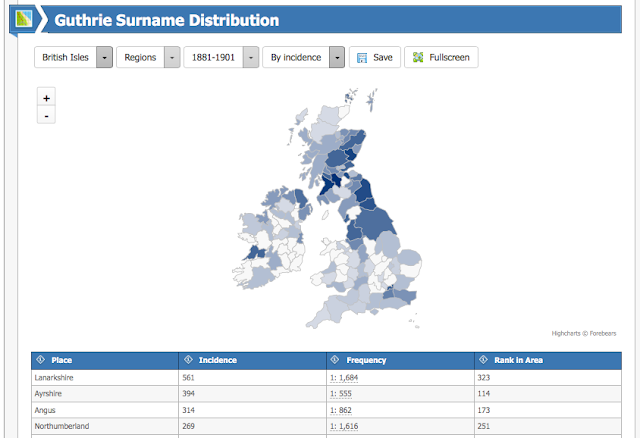 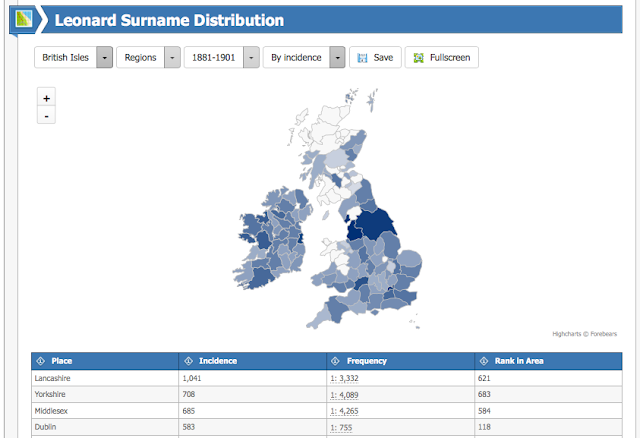 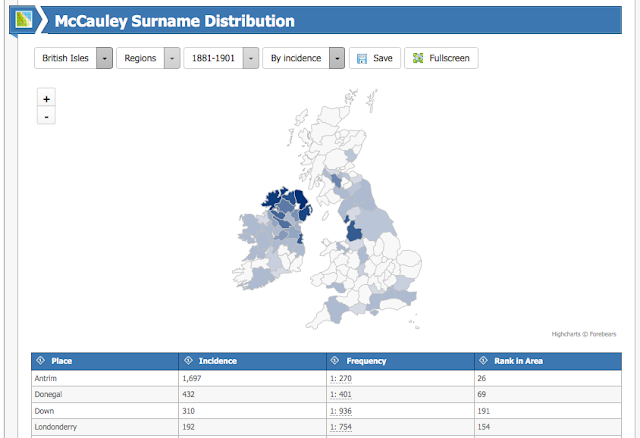 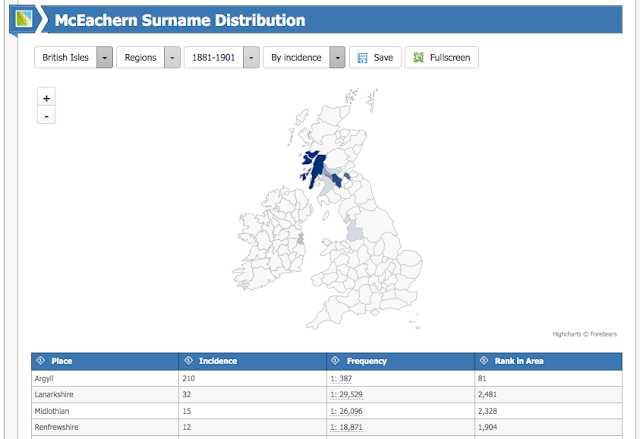 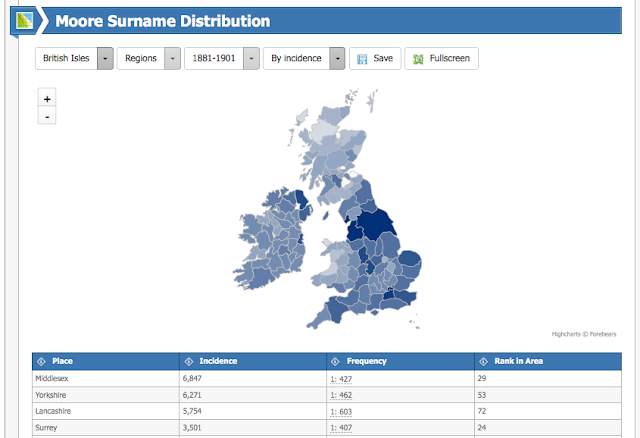 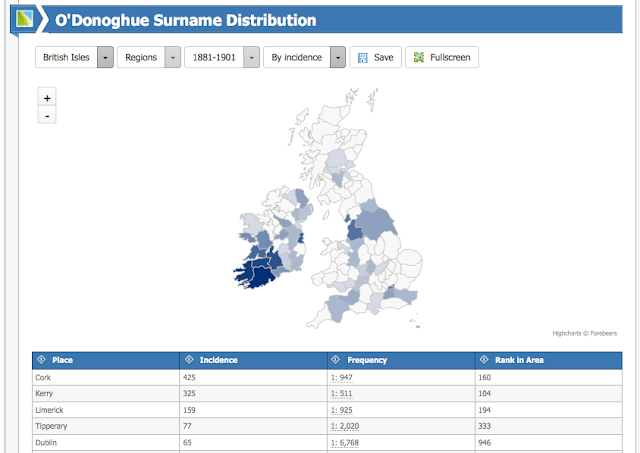 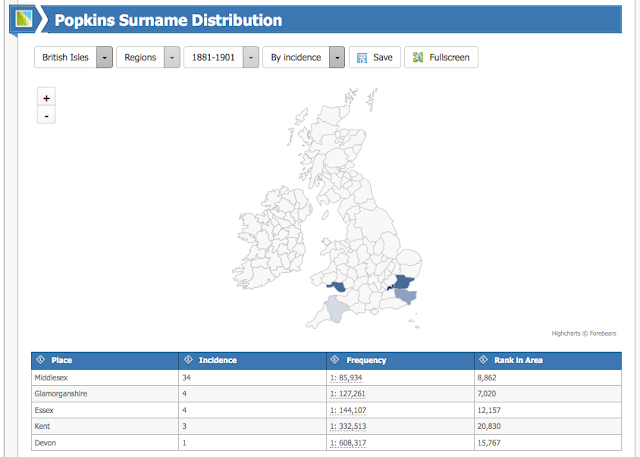 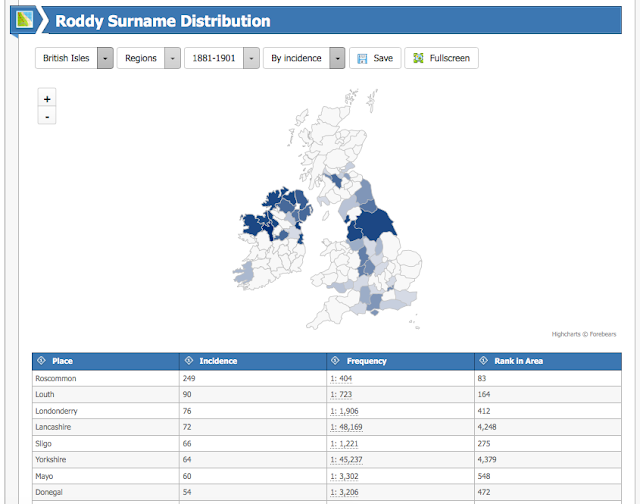 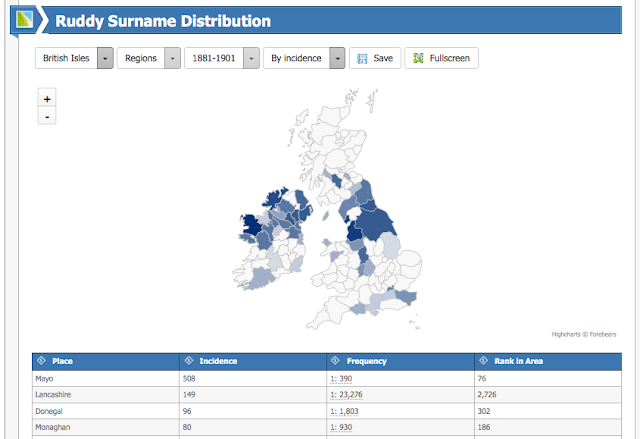 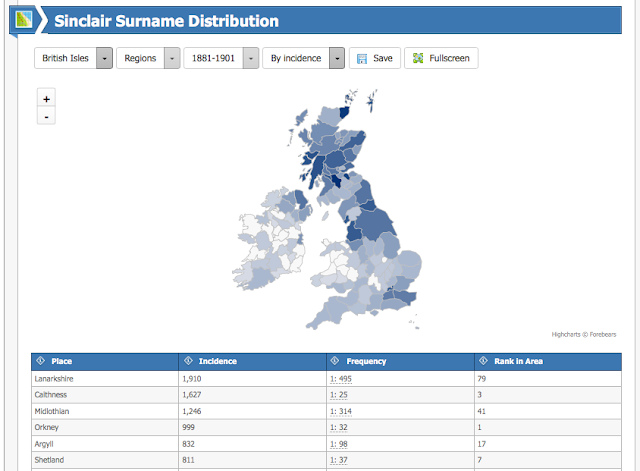 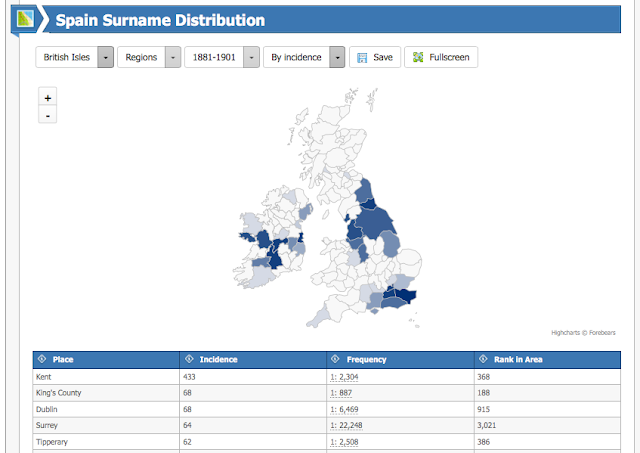 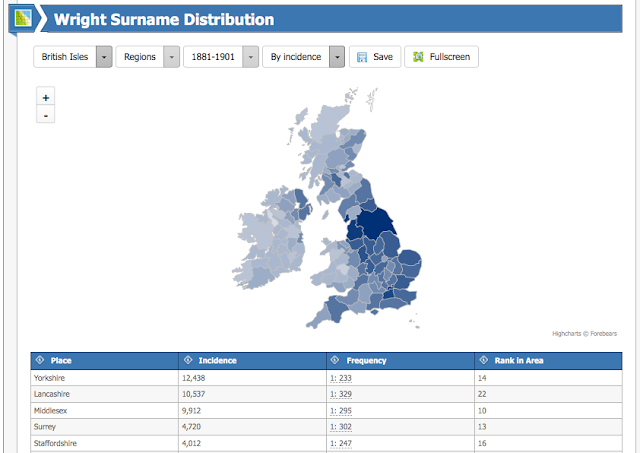 The above diagrams show that the frequency distributions of some of these surnames (specifically Anglin, Enright, O'Donoghue and Spain) show a clear preponderance in the southern half of Ireland. This distribution is not exclusive to Ireland and there are reasonable numbers of all these surnames within the UK in 1881, suggestive of emigration from Ireland to these areas.

Other surnames are clearly dominant in the northern part of Ireland (examples being Dever, Devine, McCauley, Roddy & Ruddy), whilst others are predominantly seen in Scotland (Guthrie, McEachern, Sinclair) or England (Conner, Popkins, Wright). Some surnames are fairly ubiquitous throughout the islands (Leonard, Moore).

It is not immediately apparent why there is such a geographical spread of surnames associated with the genetic signature of the Cork Gleeson's. However, there are three possible explanations. Some (in all probability) represent pre-surname cousins of the Cork Gleeson's whilst others could be the result of Surname or DNA Switches (SDSs or NPEs*) in the last several hundred years. It is also possible that the genetic signature of the Cork Gleeson's is itself the result of an SDS - and everybody has (on average) a 50% chance that this is the case. At this stage of the game it is not possible to tell which came first - the Gleeson chicken or the Popkins egg. Only further recruits to this genetic family will help answer the question.

A third possibility is that there is a degree of Convergence within this group of apparently unrelated surnames and that some of these matches are merely coincidental i.e. the common ancestor is a lot further back than might be suspected from the closeness of the match. Is there any evidence of this? Can we tie in some of the SNP data to some of the surnames? Possibly ...

The analysis of the terminal SNPs of the matches was discussed in the previous post, and concluded that there were two possible downstream branches on which the Cork Gleeson's might sit, characterised by the (currently) terminal SNPs FGC32363 or BY11289, both crudely dated to 1650 years ago. According to Mike Walsh's descendancy tree for the L513 subclade, FGC32363 is associated with the surnames Roddy (NI) and Anglin (SI), whilst BY11289 is associated with Dever & Devine (both NI). Additionally, reviewing the matches list of the two Cork Gleeson members reveals that the surnames McCauley (NI), Roddy (NI) and Wright (EN) are associated with FGC32363 (or one of its downstream branches), whilst Dever (NI), Devine (NI), Moore, and Rooney (NI) are associated with BY11289. Thus there is currently too little data to suggest that either branch is likely to be associated with a particular geographic region.

However, we will have the answer soon enough - one of the members has just ordered the new S6365 SNP Pack and the results will reveal where the Cork Gleeson's sit on the Human Evolutionary Tree.

Posted by Maurice Gleeson at 04:18