The results of these new Big Y tests have trickled in over the past three weeks or so and have been sent to Alex Williamson and Nigel McCarthy for further analysis. Alex and Nigel are two shining stars in the genetic genealogy firmament, and I'd like to explain a little why they are so important to the Gleason/Gleeson DNA Project. I'll talk about Alex in this blog post and Nigel in the next one.

Alex is a Project Administrator for two projects: the R-L21 Walk Through the Y Project and the R-S424 Project (also known as the Little Scottish Cluster Project). The Walk through the Y project started in 2009 and was the pioneering project that established many of the SNP markers downstream of marker L21. Thus Alex has been involved with SNP data analysis for the last 8 years and is one of the great experts in the field. He also runs the R-S424 Project which studies a group of men whose terminal SNP marker is S424 and who share a common ancestor about 1000 to 1500 years ago. There are many different surnames in the project but most members trace their ancestry to southern Scotland, where the common ancestor is believed to have lived.

But perhaps Alex's most famous contribution to the field of genetic genealogy is his incredible website The Big Tree. This is a draft phylogenetic tree for the R-P312 Y-DNA haplogroup and all its downstream SNP markers. It uses data from NGS Tests (Next Generation Sequencing), namely the Big Y test from FTDNA, the 2 NGS tests from FGC, and data from the 1000 Genomes Project. Most importantly, it is easy to navigate, has lots of additional features, and is probably the most user-friendly of any of the draft phylogenetic trees currently available.

Alex's tree is particularly important for us Gleason's because the terminal SNP markers of three of our current lineages within the Gleason/Gleeson DNA Project fall within Alex's portion of the human evolutionary tree (i.e. from SNP marker P312 downstream).

To illustrate this, here is the abbreviated SNP progression for Lineages I to III in the Gleason/Gleeson DNA Project. The start of Alex's portion of the tree (P312) is highlighted within the progression and clicking on the terminal SNP will take you to that portion of Alex's tree:

Alex has been analysing the new Gleason Big Y data and only yesterday added it to his tree. This has caused some major changes in the Lineage II portion of the human evolutionary tree!

It is worthwhile reviewing the progression of changes in our portion of the tree over time. Back in July 2015, 4 members had been tested on the Big Y and here is what the tree looked like as a result. Two brothers sit on one branch and my Dad and Mr Little sit on another. We all share in common the A5628 block of SNPs (5 SNPs altogether) but the brothers share 6 unique SNPs that the rest of us do not, and my Dad and Mr Little share a single unique SNP that the brothers do not - the single SNP does not have a name at this stage, and so is expressed as a position, namely 17349992 ... wherever that is.

Our nearest neighbours are a chap called Carroll, and more distantly a Pendergast and Phelps, and further out still a Creamer & a Miller, with a Mr Blake being over the hill and far away.

The other 5 members all share SNP A5628 (now also known as Y17112, just to confuse us), and below this are two branches - one branch (the brothers) is characterised by the 6 SNPs in the A660 SNP block, and the other (my Dad, Mr Little, & Mr New Member) is characterised by a block of 3 SNPs, the first of which now has a name (Y16880) instead of a position. The other two SNPs just have positions ... for the time being.

Which brings us up to today, February 2016, and the addition of 3 new sets of Big Y results. This latest diagram is a lot busier than the previous ones because the neighbours are expanding like wildfire. Mr Carroll has been joined by another family member, Pendergast and Phelps remain a cosy duo (sounds like an accounting firm), Creamer and Miller have gone their separate ways, the former running off with a McCarthy, the latter with a Treacy, and the Blakes are still over the hills and far away but on the other side. It's all systems go. And not a child in the house washed!

But the biggest surprise is in our own little portion of the tree - firstly, Mr Glisson (411177) has been joined by his closest SNP cousin, a Gleason (86192), and secondly, an entirely new branch has been formed, consisting of 2 Gleeson's. So now there are 4 branches in the Gleeson tree, and the 3 new additions have had no effect at all on the first two branches that were present back in July 2015.

We know that everyone in Lineage II goes back to an origin in North Tipperary, but over time, as more people join the project and do SNP testing, it may be possible to associate certain branches with specific locations or townlands. Let's take a closer look at the newer branches and see what we can glean from the available data. First off, the "Glisson" branch (411177).

Mr Glisson's MDKA goes back to Georgia in 1816 - he has no documentary record of a link to Ireland. However his DNA clearly links him to the North Tipperary Gleeson's so we can be 99% positive that his ancestors came from this area. The new member (86192) is in fact an old member, one of the first to join the project, and was assigned the project ID number G-05 (initials RLG). He also has the following MDKA: Martin Gleason b c1836 Ireland; d 22 Mar 1918 Chester County, Pennsylvania. I've highlighted the birth location as this could potentially give us some real clues as to this branch's origin but unfortunately in this case it does not. It only tells us that there is a link to Ireland for this particular family. We can assume with a reasonable degree of confidence that if documentary evidence existed and we were able to find it, it would lead back to somewhere in North Tipperary. But at this stage we can't narrow down the location any further than that.

Incidentally, this is a very good example of the importance of supplying your MDKA information (and updating it with any new discoveries you might make). The most valuable information for those with Irish MDKAs is the location of birth, the family nickname (if there was one), and any rare forenames that occurred throughout the generations. All three pieces of information can be crucial in establishing links between different families, and all project members are encouraged to fill out an MDKA Profile that can be published to the website.

If we look for these locations on Google Maps, we experience several of the pitfalls encountered when trying to decipher Irish place names. Firstly, we don't know if these names refer to a townland, a parish, a registration district, or some other category of place. Secondly, Kilemakill does not turn up in a search on the map, but a google search reveals that it may be near to Ballymoreen. So there is no guarantee we have found the right place. Thirdly, several places may have the same or similar names - Garryard is a townland south of Birdhill, but Garryard East & West are townlands just west of Silvermines, and it is probably here that G-71's MDKA was born. This confusion emphasises the value of local knowledge which may be required to steer us onto the right path. Thank goodness we have such knowledge within the group.

Based on this brief analysis of the new branch, it does not appear that the MDKAs for G-71 and G-66 lived close to each other. But nevertheless, in this particular example, we can say that this branch is rooted in Tipperary. Maybe there are other pieces of genealogical evidence that can help us find a link between these two families, and maybe we can get clues from their close matches based on their STR results.

We'll explore this and other topics in subsequent blog posts:

So I think you'll agree that Alex provides a great service to our particular surname project and I for one am hugely grateful for his incredible contribution, all of which is done on a voluntary basis as a service to the community. No wonder he has won awards for his work!

Instructions for sharing your Big Y results with Alex can be found on his Instructions page. And be sure to check out his Frequently Asked Questions page - this is hugely informative.

And of course no sooner had I published the post than Michael Gleeson found the true whereabouts of Kilemakill, spelt without the 'e' in the middle ... another peril of Irish place names: different spellings of the same thing. It's about 5 miles east-north-east of Thurles, not too far from Ballymoreen. Here it is (marked by a yellow marker) on the revised map ... 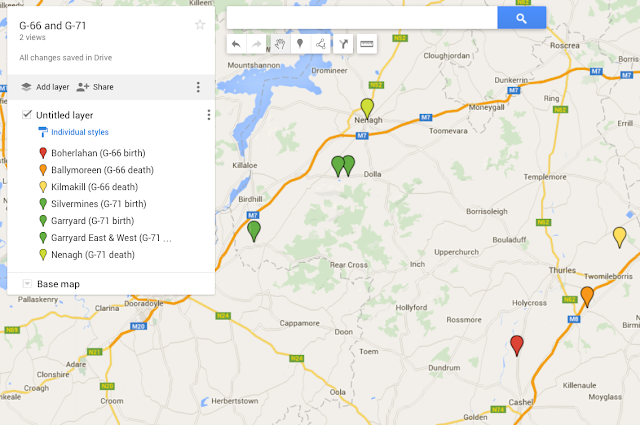 Posted by Maurice Gleeson at 06:34